5 Fundamentals and Tips on how to approach visual sense-making

How using ‘problem space’ will impact how successfully you solve problems.

How to Plan and Manage Business Growth in New Markets

When you open the door into a pitch-black room, new opportunities and knowledge are gradually revealed.

The penetrating light allows you to explore what is inside. The flow from the outside to the inside is at first silent; there is no language, you are visually making sense of the unknown. Meaning emerges from that flow of energy – back and forth until a story surfaces to explain what you are seeing and what it all means.

A visual metaphor (VM) is not a puzzle, nor is it used to describe hidden ideas or meanings. It is a way to make you feel, know, explore, and get a vivid and clear awareness of the unknown.

This post unpacks some of the concepts of VM with some examples. The accompanying video uses a few examples to explore how visual metaphors work.

What is a Visual Metaphor?

Visual Metaphors are visual artifacts that act as thresholds. They are doorways for opportunities, new knowledge, explorations, and sense-making.

In simple terms, Visual Metaphors are a type of image that, when grouped into a network with other images, enables us to tap into our cognitive neural networks. The process is unconstrained from the limitations of language. The image becomes the shortcut for the brain to create meaning freely.

George Lakoff (cognitive scientist) explains that metaphors are more than figures of speech. They are mental and neural mapping processes that impact how we think, reason, and act.

The picture superiority effect shows that we retain images better than words because they are coded twice in our memory and processed instantly. It offers the path of least resistance – creating meaning in seconds – long before language is involved.

Language only happens at a later stage to explain the meaning through narrative. 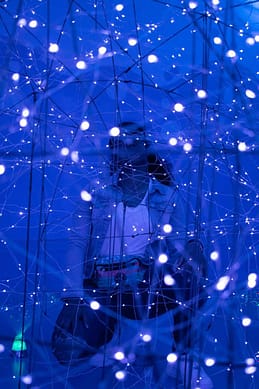 In SenseCatcher, the visual metaphor is a catch-all term at the service of visual sense-making.

Figures of speech are powerful tools that we can leverage to facilitate our thinking. For example:

Visual metaphors provide us with the freedom to use and combine any of these concepts to navigate and surface new knowledge and create meaning, bridging the gap between the known and unknown.

The main objective of visual sense-making is to use images to create maps that describe a complex situation or a problem. The primary aim is to capture as much information as possible and get to surface connections in the problem that enable us to explore all the possibilities to solve the problem holistically and effectively.

Without visual mapping, we quickly fall into the trap of cause-and-effect thinking; our cognitive limitations hinder our thinking capacity to ineffective short-term thinkers.

Using visual metaphors engages the observer and enhances your visual map-making and communication.

Let us look at some of the figures of speech and understand how they merge and help us with visual sense-making.

Metaphors have a simple structure: the TENOR and the VEHICLE.

The tenor is the thing being described (the starting idea). The vehicle is the symbolic imagery used to describe the tenor. The vehicle is the part that creates a vivid mental picture, emotion, and sensation – the objective is to extend and open the imagination to more powerful possibilities.

The purpose of a metaphor

At the basic level, metaphors compare two different things and assign a particular feature or characteristic to the first.

Apart from comparisons, metaphors are vital to:

The alternative to using metaphors is to write slabs of text to describe the idea. However, resorting to this will create nothing but clutter and confusion.

When using VM elements on a sense map, the magic starts because:

Let's look at a quick example: notice how a simple image can convey detailed and elaborate sets of ideas. The image does the job in an instant. In contrast, a few paragraphs would be needed to describe all the details like relationship, mood, clothing, stance, posture, and body language. The images do all of that in seconds.

Good literature, advertising, and movies have a long history with metaphors.

We borrow these and apply them to visual metaphors to help us enrich our visual sense-mapping skills. They work exceptionally well visually. Using them adds depth, richness, and variety to our maps.

The standard metaphor compares two unlinked things and assigns a particular feature or characteristic to the first. It is typically constructed like: X is Y. For example:

This type of metaphor suggests a comparison between things rather than stating it directly or even mentioning those things.

For example: "A woman barked a warning at her child."
The woman is compared to a dog, while the dog (the vehicle) is not mentioned. These types of metaphors work well when the ideas are common knowledge.

These are exciting metaphors. They usually get introduced at some stage and extended to maintain a theme. They typically start with a simple metaphor and evolve.

They are powerful devices that allow us to build strong, vivid imagery to create a rich story. Word of caution – there is the danger that it closes the story to the point that it only has one possible interpretation. However, it works particularly well in scenario planning, where your aim is to 'sell' and convince your audience towards a specific decision. Scenario planning is a converging activity to a degree; sense-mapping is a diverging activity in comparison.

These tend to be abstract things. They are understood by using another abstract idea.
For example: "Time is money" - both "time" and "money" are conceptual ideas. They can be very useful and easy to use with images and icons. Visual mapping uses these frequently – adding simple words can help anchor the intended concept, especially when the idea is highly conceptual.

The rule of thumb is to avoid text as much as possible, but there are times that text works best – the aim is to reduce text to a minimum.

Combing metaphors at times can be very helpful – for example:

"The new job has allowed her to spread her wings and blossom."

The message is unambiguous and powerful. There are layers instantly added to the imagery, making the visual metaphor a fantastic contribution to a map.

A trope is a thematic device. It refers to anything that gets used often enough to be easily recognized.
For example:

In movies, tropes are used to quickly communicate the maximum amount of information in the shortest amount of time. It is a clever and practical way to communicate effectively. Tropes are ideal for visual storytelling.

Let's look at another example:

Tropes tend to be culturally specific, which distinguishes them from 'archetypes.'

Archetypes are symbolic anchors that other conceptual devices evolve from. What makes them archetypes and not tropes is that they are common to all cultures and reveal human nature. They are great to use because of their familiarity with everyone. People connect with the storytelling process quickly; it makes them comfortable and becomes an easy way to draw them in.

They can be understood as the original theme that tropes evolve from.

Let us consider two archetypes:
Madonna is typically associated with mothers, but with gender roles changing, the archetype needs to evolve.
Entrepreneur/Creator - this is a new archetype. Highly valued and recognized globally, it captures the spirit of creativity, and people who create products of lasting value. Traditionally they have been men, but today we also associate women with the same characteristics.

Both similes and metaphors are used to make comparisons. However, there is a difference, and it is all about using two words: 'like' or 'as.'

Symbolic images help us to explain, capture, and understand abstract concepts that are not always easily described. The symbol is an element used to communicate or represent something like an action, person, place, object, or idea.

When creating visual sense-maps, symbols are powerful ways to quickly capture what is happening in a fraction of a time with a simple image of the symbol. A word of caution – make sure the meaning of the symbol is shared by everyone. For example, white in the West represents purity, peace, elegance, and cleanliness. In contrast, in some Asian countries, white symbolizes death and mourning.

Personification is a particular type of metaphor where you assign human qualities (attributes, feelings) to something that isn't human or even living. It is a valuable device to help us understand, sympathize with, and connect or react emotionally to non-human things.
For example:

There are no limits or strict rules to create visual metaphors.

I recommend you approach the process unrestrained (you can edit later) – explore, express, and communicate.

Try not to be too obscure, however. There is a danger that the meaning embedded in the image becomes too narrow – the objective is to communicate.

A good test is: do other people understand what is happening without explanations? In complex and highly abstract situations, using a simple word becomes necessary. I often find myself using even a phrase, and that seems to work well.

Personally, I start with one idea when I create my maps. I focus on capturing and exploring one concept well. I layer it to get as much detail and information around the idea as possible without making it too cluttered or too obscure. On other occasions, I find that it works best by getting as many of the concepts onto the map and then revisiting each element later to refine and elaborate on them if needed. There are no strict rules – the idea is to go with the flow and to make sure you are capturing as much detail as clearly as possible.

The process often works best over time. You can easily come back and change things and move things around.

You will find you get more information later that will clarify or change your understanding of your situation. It offers the perfect opportunity to add or change your images to capture that new meaning as it emerges from the process. It is cyclical and should be seen and a work in progress. (link to the video on sense-making)

Good visual metaphors enable us to quickly make sense of complex situations and tell stories of the problem, helping us explore better solutions. That is the ultimate objective.

This type of communication is cognitively friendly because there is a high degree of novelty, surprise, and diversity, making the sense-making process fun and effective.

People's cognitive activity is triggered involuntarily. Humans instinctively try to elaborate and create a story-driven theory to explain the sense-making process. We get pleasure from solving problems by weaving them together to form a coherent explanation. We get a sense of accomplishment.

The process creates a bonding experience and ownership with the participants and provides vivid memory recalls.

Working with visuals increases the participant's perception of trust and credibility. There are high degrees of engagement and mental participation. People are more willing to adopt a solution if they have been involved in the process.

Good luck and have fun in being productive and smart.

I suggest you do not clutter your visual maps to the point that they become too messy. Although our brains are very good with visuals and extracting meaning from them, there is a danger that the visuals can become cluttered and confusing. Try to strike a balance between complexity and comprehension. SenseCatcher allows you to deal with high complexity through nesting. Nesting allows you to nest maps within maps to retain a good level of understanding.